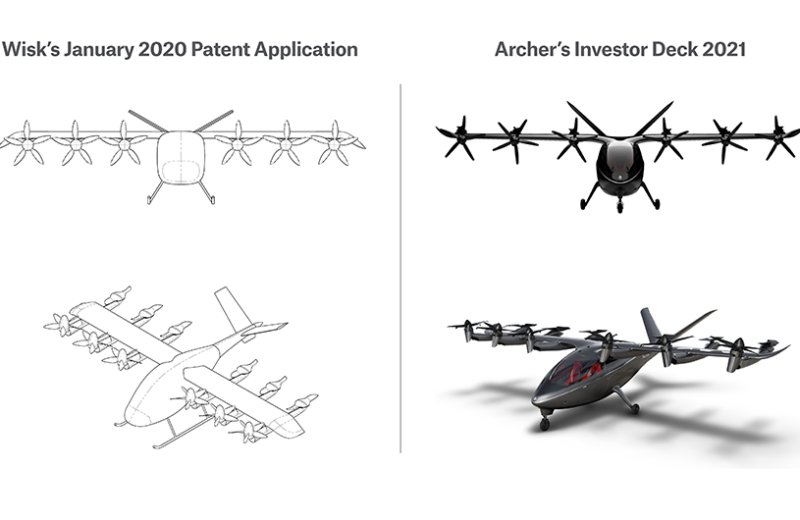 When two of the market leaders are involved in litigation, you know an industry is maturing. Wisk Aero yesterday announced that it was suing competitor eVTOL manufacturer Archer Aviation for the alleged theft of trade secrets and patent infringement. The lawsuit states that Archer’s business is “built on intellectual property that is not its own”.

“It’s regrettable that Wisk would engage in litigation in an attempt to deflect from the business issues that have caused several of its employees to depart. The plaintiff raised these matters over a year ago and, after looking into them thoroughly, we have no reason to believe any proprietary Wisk technology ever made its way to Archer,” a spokesperson from Archer told Revolution.Aero.

Wisk claims that Archer’s concept vehicle copies designs that it submitted in a confidential patent application to the US Patent and Trademark Office in January 2020.

It alleges that thousands of files of confidential “trade secrets for aircraft designs, component designs, system designs, manufacturing, and test data” were stolen by one engineer the night before resigning from Wisk. Archer hired nine more engineers the same month.

Archer told Revolution.Aero it is fully cooperating with the authorities. The spokesperson said: “Archer and three other Archer employees with whom the individual worked also have received subpoenas relating to this investigation.”

In response to the allegations, Archer said it has placed an employee on paid administrative leave in connection with a government investigation and a search warrant issued covering the employee, which it believes are focused on conduct prior to the employee joining the company.

Traces of what Wisk says are suspicious files downloads are being used to support the claims. Wisk also claimed the design of its eVTOL aircraft was not based on common knowledge. The 400 eVTOL developers have “distinct designs based on their own unique innovation process”.

Wisk’s all-electric autonomous air taxi prototype, Cora, has completed more than 1,400 test flights. The company continues its partnership with the New Zealand government, which will allow the developer to test and create a commercial unmanned aircraft service for passenger transport in urban areas.

It also entered into a partnership with NASA, in 2020, to bring advanced air mobility to cities in the USA.

Until early 2021, when Archer merged with the Ken Moelis-backed SPAC (Special Purpose Acquisition Company), Atlas Crest Corporation, it was in stealth and had not yet released images of its vehicle design.

However, with the announcement of the $3.8bn SPAC deal and the $1bn United Airlines order, for 200 Archer vehicles, the company caught the media’s attention.

Archer was also involved in a trademark infringement case last year, with Piper Aircraft, which claimed the company’s name infringed on the Piper Archer product line.

The alleged theft of trade secrets appears to be similar to the case between Google’s self-driving car company, Waymo, and Uber.

Former Google engineer and entrepreneur Anthony Levandowski was at the centre of a case between Waymo, where he worked before moving to Uber. The case lasted three and a half years.

More on Archer and Wisk:

Archer comes out of stealth with SPAC

Archer told Revolution.Aero it intends to defend itself vigorously.

Wisk said: “We believe we have an obligation to our employees, partners, and investors to protect our IP, and a broader duty to help ensure the responsible development of this industry we helped to create.”