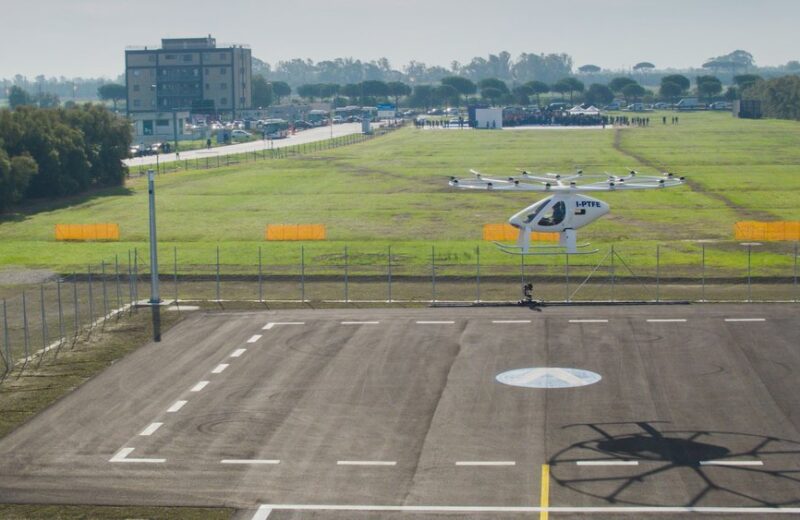 Last week Italy’s first vertiport opened for testing. The occasion was marked by the first crewed flight of an eVTOL in the country as Volocopter’s VX2 took to the skies over Rome.

The vertiport has been designed and built by Aeroporti di Roma (ADR), UrbanV, Atlantia and Volocopter at Fiumicino’s Leonardo da Vinci International Airport (pictured above). An apt location given its namesake’s early forays into aeronautical design.

The timescale from concept to operations is impressive. Christian Bauer, Volocopter’s chief commercial officer tells Revolution.Aero the team went from a partnership agreement to a flight test in less than a year.

“The UAM-ecosystem approach is paramount to making this new form of mobility a reality. Only with partners who are experts and very well connected in their respective fields, do we have the possibility to make this feat possible,” he says.

Volocopter also the took the opportunity to demonstrate its digital booking process through its platform, VoloIQ. Bauer explains: “The VoloIQ digital backbone is crucial to offering services from both customer and operations perspectives. It makes collaboration and integration, as well as international scaling much more effective.”

But are vertiports really at the cutting-edge of future flight technology? There is massive focus given to the UAM-ecosystem and the technology and infrastructure in development that it will consist of. Yes, Vertiports need to be constructed, but what is new? How do they differ from heliports which have been built in urban areas for decades?

“Vertiports are very different from heliports,” says Bauer. “They require battery charging technology, handle much more traffic and will be located more centrally in cities. The infrastructure has a smaller footprint than a conventional heliport. This will be possible because the aircraft fulfill the highest safety requirements in aviation, are much quieter and free of emissions in flight.”

Last month, the FAA released vertiport design standards in Engineering Brief 105. The agency says it provides the foundation needed to begin “safely building infrastructure in this new era of aviation”.

The FAA also tells us it is working to develop a more comprehensive performance-based guidance on vertiport design to accommodate an even more diverse fleet of VTOL aircraft.

“The old design concept of a vertiport was based on very large tilt-rotor aircraft such as the military’s Bell V-22 Osprey and the Agusta Wesland AW609, which required a much larger infrastructure footprint that is incompatible with urban environments. The next generation of VTOL aircraft requires new vertiport design standards and specifications,” an FAA spokesperson told Revolution.Aero.

The FAA admits heliport design criteria have provided a foundation for vertiport standards. “The loading and offloading of passengers would be similar to that on heliports, as would the marking and lighting requirements,” said the spokesperson.

However, the dimensional geometry, load-bearing requirements, electric infrastructure needs, taxiway separation distances and parking area design requirements for vertiports “may warrant differences from heliports based on the characteristics and performance capabilities of emerging VTOL aircraft.”

“We look forward to continuing working with the industry to further advance this new era of aviation,” they added.

Although the days of Da Vinci’s questionable (aka deathtrap) ornithopter designs are gone, for Volocopter, ADR, UrbanV, Atlantia the work to prepare infrastructure, receive local approvals and raise awareness about eVTOL technology continues. “This will also include educating the public and answering potential questions and worries,” adds Bauer.