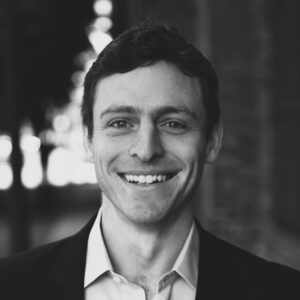 Conor leads legal, regulatory, and public affairs for Zipline, the world’s largest automated on-demand delivery service. We design, manufacture, and operate an uncrewed aircraft system, which to date has made more than 360,000 commercial deliveries containing more than 6 million units of vaccines and other medical products and flown over 25 million autonomous miles in Ghana, Japan, Kenya, Rwanda and the United States. On average, someone receives a delivery from Zipline every two minutes.

Prior to Zipline, Conor lead US legal, compliance and government relations for Funding Circle, the leading global SME lending platform, on its journey from startup to publicly-traded company and before that served as CEO of Indego Africa, a social enterprise and lifestyle brand that supports artisan women through economic empowerment and education. Conor began his career as a corporate attorney at Latham & Watkins.

Conor is a Presidential Leadership Scholar, a Truman National Security Fellow and a co-founder of several influential public policy organizations including the American Fintech Council, the Responsible Business Lending Coalition and the Alliance for Artisan Enterprise. He has been recognized as the Bay Area’s top private company lawyer, on the US General Counsel Powerlist, and most recently by the Financial Times and National Law Journal for innovation and crisis leadership in COVID-19 pandemic response. Conor graduated from NYU Law and Georgetown and is admitted to the CA, DC, MA and NY bars.