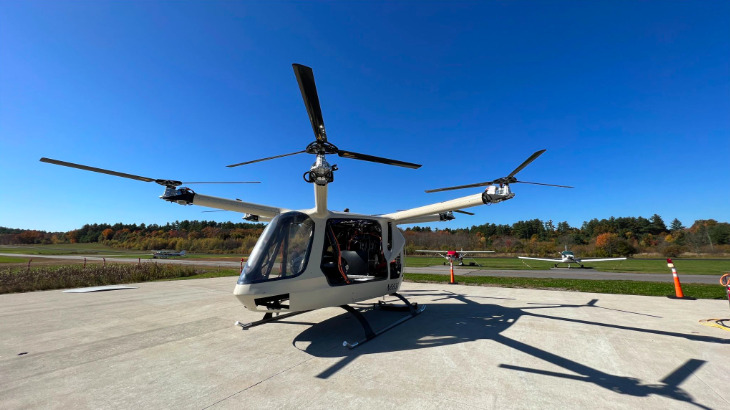 Alakai Technologies has just received approval from the FAA to flight test its second experimental vehicle. The first has already flown, and is continuing flight testing.

Skai, a hexacopter that can fly four passengers or 1,000lbs of cargo up to 400 miles, is thought to be the first and only hydrogen-powered eVTOL. It carries a double-walled tank of liquid hydrogen kept under low (100 psi) pressure at -423 degrees Fahrenheit. Combining that with oxygen causes the fuel cells to produce the electricity required to give Skai a top speed of 115mph.

Revolution.aero spoke to Brian Morrison, founder and director. “Obviously nobody has been through this path before so subject to changing requirements and, possibly, politics — who knows — but we are aiming for the middle of 2024. Thats for production certification and to be able to start selling and shipping.”

Alakai began designing Skai and filing core patents in 2012, before beginning development with exterior funding in 2018. Now having designed and built two experimental aircraft the start-up will use the data extracted from flight testing to assist in the certification process for their commercial vehicle.

But why decide on hydrogen as the method of propulsion? Actually, when Morrison founded the company he was initially looking at ways to power Skai using batteries. “What I kept coming back to, across well over 1,000 simulations, was you are only going to get up to 15-20 minutes of airborne flight while carrying the weight of batteries. So I started down the path of what can we do with fuel cells — which were becoming more prominent in automotive applications.  And which provided a green – non-polluting – alternative.  ”

Whilst the target market is broad – air taxi, med flights, cargo, etc. – disaster relief, especially on the mainland US, has been identified as an initial use case. “We can sell aircraft to states to operate by the National Guard to be used in disaster relief such as hurricanes. They can actually fly our vehicles prior to when the FAA issues a certification because they will be used for defense purposes,” says Morrison.

Morrison confirms Alakai has a major launch customer who will be announced in due course. They plan to use Skai as an air taxi initially on the US West Coast. Alakai plans to produce between 500-800 vehicles per year with a view to ramping up production to higher volumes post-2025.