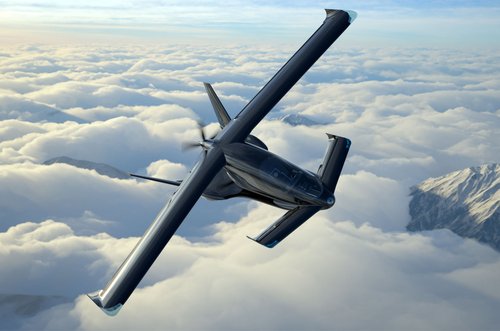 It is no secret that there are some difficulties in the capital markets right now. Although series A funding has held up well, venture capital and large-size deals have slowed from the frenzied pace SPACs were setting in 2021. Market analysis forecasting a period of consolidation is not uncommon.

One firm re-privatising itself to attract investment from the private sector is Horizon Aircraft. Acquired by Astro Aerospace in June last year, Astro has agreed to sell 100% of Horizon’s equity in exchange for certain Astro public securities and a fraction of the ownership of the newly privatised firm. Horizon has just completed Phase 1 of the AFWERX HSVTOL challenge and plans to begin flight testing a 50%-scale prototype of its Cavorite X5 (pictured) concept this month.

“This transaction will allow Horizon Aircraft to accelerate development of our eVTOL in the private sector with access to more flexible funding mechanisms,” Brandon Robinson, CEO of Horizon Aircraft tells Revolution.Aero.

“It is a win-win situation, Astro can continue to explore its own technical developments on the fully electric, short range eVTOL side in the public space and then we have a little more freedom in the private sector to attract that necessary capital and develop our longer-range, hybrid electric VTOL with private investors that believe purely in the Horizon Aircraft vision,” adds Robinson.

Horizon with its 50%-scale prototype is now looking for investment to see the Cavorite X5 through to operational service. “We’re looking for long-term, strategic partners to join us, and are excited about the freedom to operate in the private sector.”

Jason O’Neill, chief operating officer, Horizon tells Revolution.Aero: “These funds will carry us through the next 24 months, at the end of which we will have a fully functional 100%-scale prototype, capable of carrying 500 kg of useful load over 800 km at speeds up to 450+ km/hr.”

Robinson says: “This is a company that has experience in designing, building and flying new aircraft from a clean sheet design.” That means transparency on levels of production and distancing itself from often exuberant estimates made by other developers in the sector. Robinson’s father, who has a background in advanced manufacturing as well as aerospace engineering, says it is often harder to build the machine that builds the machine than the machine itself.

“So our estimates for initial low rate of production [are realistic]. We are not one of those companies that says we will produce thousands in a few years. We will start with low-rate and we have a very reasonable ramp up plan,” says Robinson.

O’Neill adds: “The key element of this is partnering. Whilst we don’t have any announcements to make as yet, we have a shortlist of some very qualified partners on the hybrid engine, batteries and electric motors, the airframe and others. It was a large advantage of going through the AFWERX Phase 1 because it introduced us to some military-class partners and prioritised our team.”

With pre-sales opening after Horizon’s 50% scale prototype completes flight testing programme, the aim is to have a full-scale prototype flying in two years before certification in 2026.You can find more information and contact the team at Horizon Aircraft here.